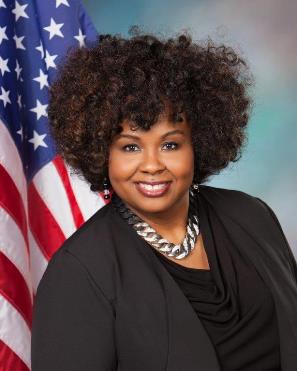 DeSoto’s Managing Director of Parks & Recreation, M. Reneé Johnson, knows her subject matter better than just about anybody in parks & recreation business. The Managing Director has spent nearly three decades helping guide parks and recreational operations in four different cities including Dallas.
She previously served on the National Parks & Recreation Ethnic Minority Society Board and has been called on by the Texas Recreation and Parks Society and the National Parks and Recreation Congress to serve as a speaker at state and national conferences.

During her tenure in DeSoto, Managing Director Johnson has managed efficiently and leveraged resources to allow for the expansion of cultural events, educational enrichment programs, community partnerships, and targeted teen recreation and volunteerism. In 2016 Johnson led DeSoto’s Parks and Recreation Department to a coveted CAPRA accreditation designation. CAPRA, the Commission for Accreditation of Park and Recreation Agencies, accredits park and recreation agencies for excellence in operation and service making DeSoto one of just 174 accredited park and recreation agencies in the United States.

Before moving to DeSoto, Johnson served the City of Dallas as a District Manager for the Parks & Recreation Department and was instrumental in leveraging the funding to build their first downtown City operated dog park.

Managing Director Johnson currently serves as the Vice-Chair of the DFW Director’s Association. She previously served as the Bicycle and Pedestrian Action Committee Chair for the North Central Texas Council of Government and is a proud graduate of the University of Arkansas at Fayetteville.